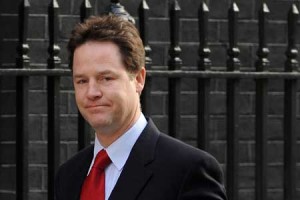 Nick Clegg launched his social mobility strategy amid great fanfare last week. Clegg, a former intern himself, says he no longer wants to see  people get internships in  Parliament just because their parents “whisper in the ear” of the right person at their golf club. He also says that he wants to see interns properly remunerated. We welcome this push for change, but the strategy won’t mean much if the place where Clegg himself works – Parliament – remains the preserve of the wealthy and well-connected.

The fact that MPs across all parties use unpaid internships is well known. In 2009, Unite the Union estimated that interns carried out 18,000 hours unpaid work each week in Westminster, and 44% didn’t even get travel and food expenses. The branch has argued that in practice Parliamentary interns are actually ‘workers’ not ‘volunteers’ and are being exploited. Expenses-only internships also means that only wealthy people can even consider applying to be an intern. It also means most of the interns working in Parliament are from the London area.

One of the reasons the practice is continuing is because the staffing budget limit for MPs is so low it makes it difficult to find the funds to pay interns. Nevertheless, MPs should not be taking on interns to undertake work without paying them at least the National Minimum Wage (NMW). The demand from Members’ offices is also going to increase when the number of MPs is slashed by 50 in the coming years, so interns will likely be required to take on more unpaid work and in greater numbers. The fact that MPs will represent more people over wider areas is not going to reduce the amount of work that is expected of them by their constituents.

Online campaigns from organisations like 38 Degrees have opened up new avenues for communications with MPs. Its website boasts that 250,000 people contacted their MPs about the Government’s plans for the NHS. If they are to get re-elected, MPs have got to be more accessible than ever to their constituents – online, face to face and in the media. To do this they need to rely on staff and, in reality, interns as well.

Nick Clegg needs to go further than just saying he wants to see better internships – he needs to support action to change the way things are in Parliament. His new social mobility strategy looks hypocritical when Parliament can’t get its own House in order. Parliament and its MPs should lead by example. We want to see interns paid at least the NMW and ideally the Living Wage or London Living Wage. At the bare minimum every genuine volunteer should receive expenses for travel, lunch costs and receive useful professional training during their placement. No-one should be forced to pay for the privilege of working in Parliament.

Nick Clegg needs to support Unite’s campaign for IPSA to create a dedicated internship fund for MPs and support the Speaker’s scheme to find sponsorship for interns. Today we have written to Nick Clegg to ask him to work with us on this.

If Nick Clegg really wants to fight nepotism he should start here.