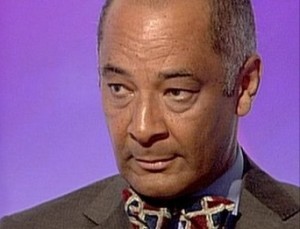 The head of IPSA, Ken Olisa, has come under fire from the parliamentary staff branch of the Unite union for a comment he made in an interview with Iain Dale for Total Politics before Christmas. In response to a question about the training IPSA staff receive on how to deal with MPs, Olisa joked: “Well, there’s the samurai course…”

Unite feels that this comment is “particularly insensitive” given that this weekend marks the ten year anniversary of the attack on Liberal Democrat MP Nigel Jones and Cheltenham councillor Andrew Pennington by a constituent with a samurai sword. Jones was injured, but Pennington was killed as he tried to wrestle the weapon away from the man. He was posthumously awarded the George Cross for his actions in trying to save Jones from the attack. In addition, they cite the stabbing of Stephen Timms MP at a constituency surgery last year, and call for Olisa to make an immediate apology.

“These comments by Mr Olisa show not only contempt for parliamentary staff but also a lack of respect for those who have lost their lives while providing a vital service to the public.”

She went on to call these comments “just one more example of the contempt in which they hold us” in the wake of the expenses scandal.

Parliamentary staff aren’t the only ones feeling negative about IPSA – as we reported last week, MPs used questions to the Leader of the House to once more express their dissatisfaction with the way the expenses system is being handled in the wake of the expenses scandal.

You can read Iain’s interview with Olisa in full here and judge for yourself whether Olisa was really being deliberately insensitive, or whether it was just a very unfortunate slip of the tongue. Iain’s own view is the latter. He told me this morning:

“I doubt very much Ken Olisa realised what he was saying. I am no fan of IPSA but I suspect this is cock up rather than conspiracy – not untypical in the world of IPSA!”

UPDATE 12:51 – IPSA have released the following statement in response to Unite’s claims (many thanks to Political Scrapbook for the tip-off). They deny that there was any intent to reference the attack, and also seem to by denying that it was even intended as a joke.

“These comments were made in an interview given and reported last year. The comments made no reference, explicit or implicit, to any attack on an MP or their staff.

“All of IPSA are working hard to help to restore trust in democracy and we are taken aback at the suggestion that we would make light of such an incident. It is obvious from reading the interview that no offence was intended.

“Furthermore, the claim that IPSA holds MPs’ staff in contempt is untrue. We have held a number of meetings with MPs’ staff and their representative groups, including Unite, and have hosting training sessions for more than 1,000 people who work for MPs.”